This morning I trudged along the muddy road with Ellis on my shoulders and a floppy hat on my head.  The hat kept obstructing my view, so I couldn’t lift my head much, and I focused only on the brown stones and dirt littered before me.  Our van was parked a mile behind me at the top of the hill.  We’d already gotten seriously stuck in the mud on the last hill, and Edwin didn’t think we should risk it on this one.  So we had been waiting for the sun to come out and dry up the road, which we were assured would only take about 20 minutes. 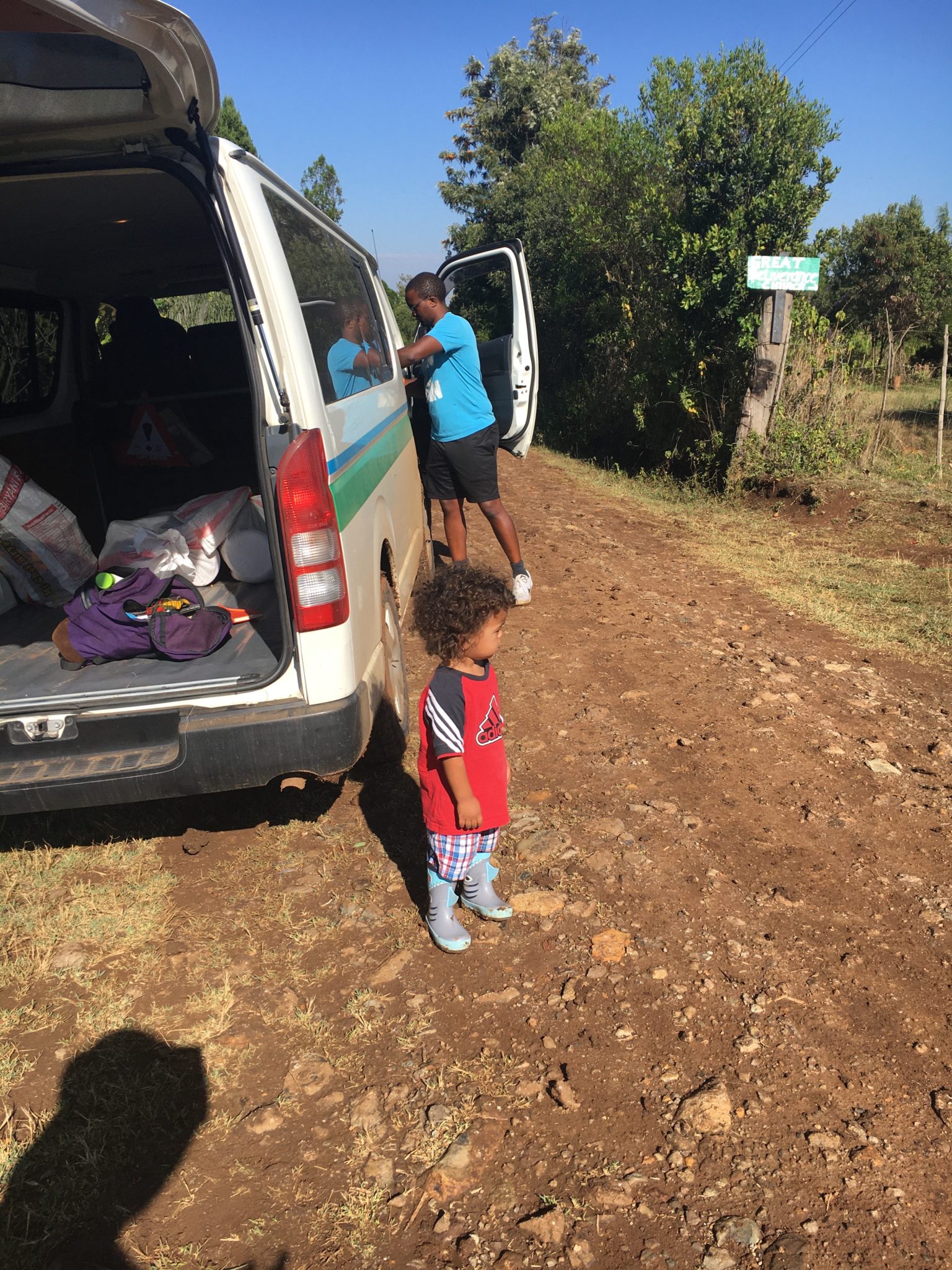 Waiting for the mud to dry

After waiting an hour, Ellis was becoming restless, so I decided to get some exercise and just start walking.  Edwin said he’d pick us up once he’d made it down and up the hill.  We continued along and watched as men desperately tried to shovel out another truck that was stuck coming towards us in the opposite direction.  Thirty minutes earlier, Edwin had told the driver to wait, that it was too muddy.  Now his wheels were spinning, and the truck certainly wasn’t going anywhere anytime soon.  We walked over a bridge, and I noted that it looked quite narrow and unsafe.  It was pure mud, and the “guardrail” on one side was broken. 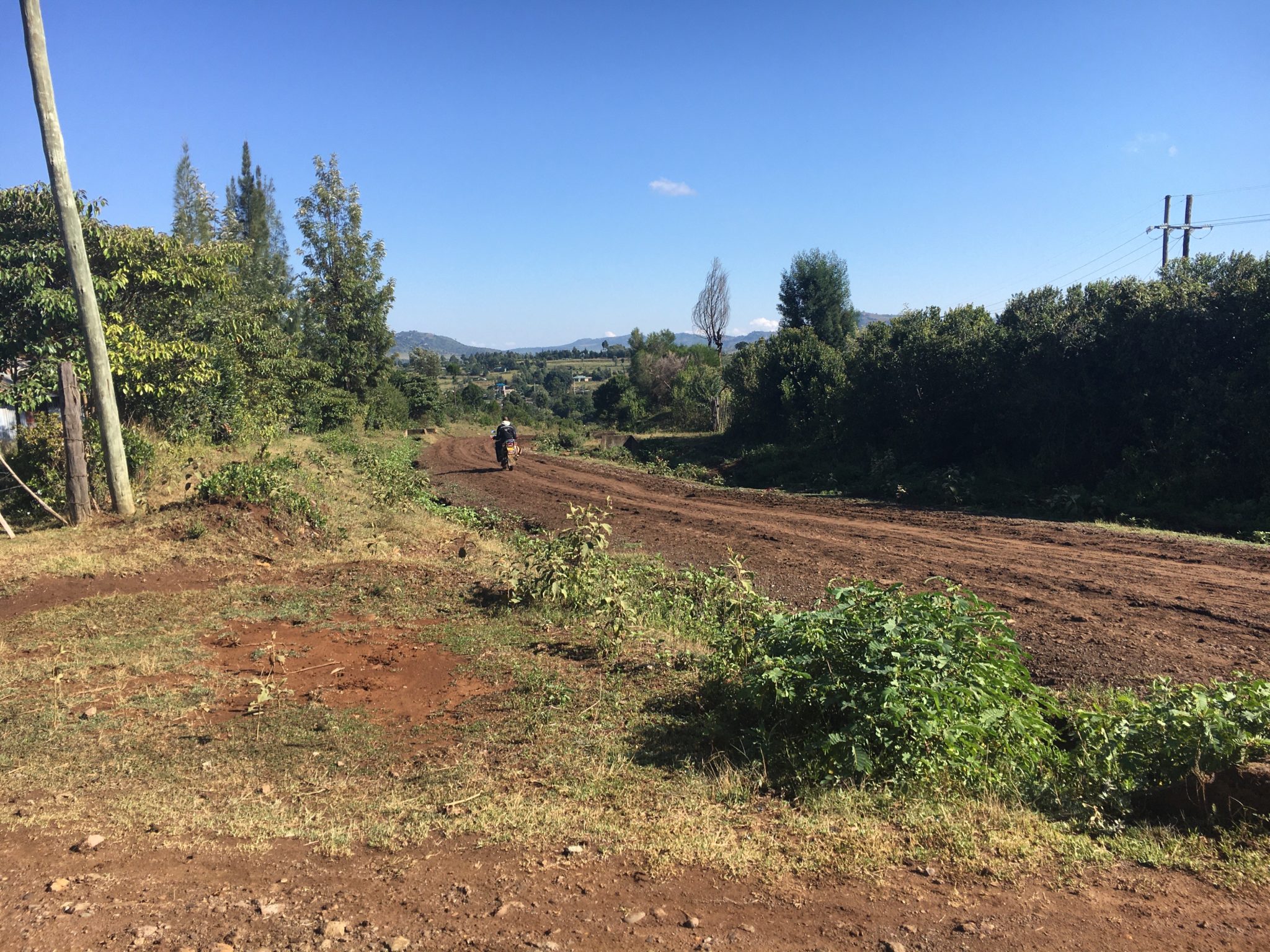 When Ellis became too heavy from walking, I put him down and gave him back his muddy shark rainboots that I was carrying.  Everyone along the road shouted and waved at us.  It’s one thing to be a mzungu and stand out, but being a kid half mzungu really makes everyone stop and stare.  We kept walking and waving and being passed by piki pikis (the only reasonable way to get around right now).  I tried in my broken Swahili to explain myself: “Gari ni stuck,” (the car is stuck), and everyone nodded along that they understood.  Finally, I heard a vehicle in the background and turned around to faintly see our matatu coming.  Edwin pulled up and we piled into the van.

“I almost drove the van into the river,” he tells me.  And then the details start coming: one wheel was partially hanging off the bridge as the van was sliding around; people had to come dig him out; he's so glad he had 200 shillings ($2) in his pocket to pay them to help.

To clarify here, the bridge was HIGH off the ground, and most surely Edwin would have plunged to his death.  Today, we had our miracle, and surely we are smart enough to never take that route in the rain again.   After 3 hours, we finally made it out to the school safely.

A lot of people have commented on the “adventure” we are having in Kenya, and sure, it does look that way sometimes.  But here’s the thing…if I was on vacation and dealing with scenic muddy roads, it would feel like a grand adventure.  But when this is your life, and you start to realize you’re going to have to figure out how to move around or stay put on rainy days like this, and you realize you’ve spent 3 hours going 5 miles, it just feels hard.  Really, really hard friends.  I’m not complaining; I’m just clarifying.  And when you also realize that your one crazy day, is every other villager's normal routine, you also realize you have nothing to complain about.

We’ve visited this property in multiple different months, but this is the first time to really get a taste of what it’s like here when it rains. The neighbors told Edwin that they’re sorry he was stuck but they’ve really prayed for rains and are grateful their crops can grow. I’m trying to see the silver lining.

We had a similar experience driving to the school yesterday except that someone gave us an alternative route with a steep cliff that hadn’t yet washed out, and we made it in and out.

After all this, Edwin came up with a new proverb: “long is short.”  There’s a long route to the school, one we took yesterday, and it’s probably an hour and a half drive from town.  But the road is a little bit better, so I guess that’s the one we will have to take when it’s rainy.

Saturday reality started to set in for me.  The entire time we’ve been here, I’ve mostly been in Nairobi, and I know the city pretty well.  As much as it’s crazy, congested, and filled with poor air quality, it’s like a second home.  People know my name, and I can Uber and matatu my way around.  Nanyuki is great; I really do like it, but I just don’t know it yet.  We are still outsiders, and things are going to take time.

Yesterday, on our way to see Edwin’s grandma, we stopped to pick up camel meat for her from the butcher.  Ellis and I sat in the car waiting.  A little boy, probably around 8, came up to the window and started asking for money.  I could tell by his clothes and eyes that he was living on the streets.  Back in 2011, my sister and our friend did weekly ministry with kids living on the streets in Nairobi.  I have some wonderful memories of that time, but it was a very overwhelming experience.  There are so many layers of issues that compound when living on the streets.  Most of the kids are addicted to sniffing glue; they’re often abused; and they’ve been out of school for months or years.  Seeing street kids is always heart wrenching, but I think it hits you in a different way when you’re a parent.

For me personally, I’d always rather give the street kids food than money, just so I know they’re eating instead of sniffing glue, and in this case, I didn’t have any food.  The kid kept begging over and over, and all I could think about was that there was a thin glass window separating my kid and this kid from 2 very different worlds.  How did this innocent kid end up on that side of the glass?  I so wanted to look away, but Ellis, in all his innocence, started putting his hand up to the glass waving at the boy, and the little boy put his hand up against Ellis’.  Ellis continued to press his hand against the window and the other boy would put his hand up, almost like a game of high five that continued for 10 minutes.  It was so precious, that when Edwin came back, all I could do was start crying.  Edwin pressed 10 shillings into the boy's hand, which would often send most kids away running for food.  But instead the boy came back around to our window and said a big thank you.  The dichotomy of worlds here, between well-fed and not, between opportunity and lack, is something I will forever wrestle with.  Luke 12:48 tells us "To whom much is given, much is expected" and I can only acknowledge that I have been given so much, especially things that I take for granted.

When we finally did arrive today, we met up with Sam, who works with an organization that helps with water collection.  Sam told us that Kenya is wasting so much water from lack of proper collection and that the entire country could be fed if it was done properly.  He’s advised us against putting in a borehole because of the cost and all the maintenance challenges it can bring.  Instead, he was positive and confident about the amount of water we could store up just from having buried tanks, gutters, and a large collection tower. 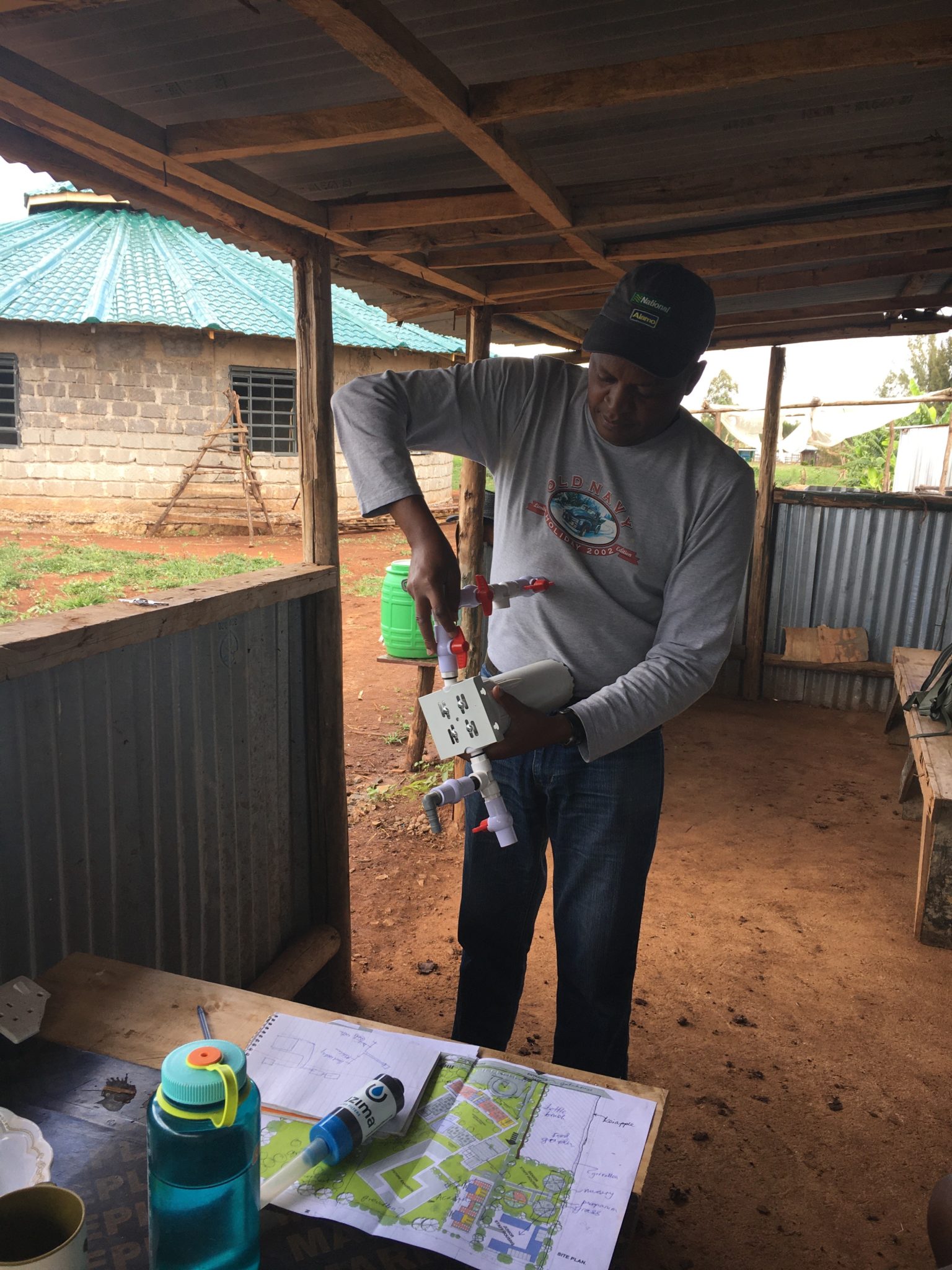 Sam explaining about the water filter

We have a ton to do, and I mean a ton.  The rainwater collection alone, which should serve us for decades to come, is going to cost $5000.  Meanwhile, there’s plastering, and electricity, and finishing the stones and roof of 2 of the classrooms.  I know we’ve already asked so many times for money.  I don’t want to ask again.  I’ll just say that if you’re in a position to help, these are some of our current needs.  Keep praying for strength and encouragement and that God would continue to put more key people in our path.