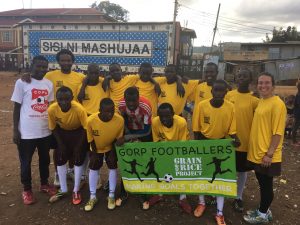 If you’d arrived at our house this morning, you’d have wondered why Edwin and I were jumping for joy and praising God at 9 a.m.  It certainly wasn’t because of the bleating goat that someone is literally keeping right outside their house in this urban area, nor was it the squawking chickens and roosters that insist you can’t sleep past 7.  It was the sight of hot, steaming water coming out of our shower!  Since arriving, we’ve taken warm bucket baths with water we’ve heated in the water kettle, and honestly, I haven’t minded.  It is very normal to me after all this time in Kenya.  But Edwin fixed the shower, which he thinks was clogged with dirt, and I’d forgotten how wonderful it is to have steaming hot water dripping from above. 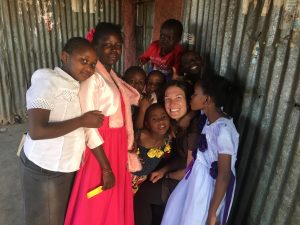 en reflecting a lot on just how numb I am to everything around me.  The more time I spend in Kenya, the more time I seem to block some things out for the sake of functioning.  Even though I’m in Kibera every day, I am only on the edge of the slum, and that subtle difference is just enough to really separate me from many people’s reality.  Yesterday, I took a trip deep into Kibera to meet with a grandma of some of the kids in our program.  We had a deep, heavy conversation, inside of her tiny house that merely had a dirt floor and was so dark, that my eyes squinted to adjust.  A tattered sheet hung across the room as a meager attempt to create privacy and divide up the room.  We visited another girl’s home, and this one was equally as small, but with a cemented floor, and at least 5 kids running around, no mama in sight to care for them.  We hopped over sewage and around trash as we went.  And yet, when we left, what I mostly thought about was that I was happy we made the whole trip in only an hour, and were back in time for the next program at GORP.  Later, I felt a lot of shame as I considered my in-sensitiveness.  I pray that God would make my heart break for the things that break His heart and that I would not be afraid to feel the injustice around me.

Earlier in the week, our artisans had told me the story of what happened the night before when the heavy rains fell.  Kibera lies along the river, and many houses are on a steep hillside or in the low parts of the valley.  As the rain gushed through, without a proper infrastructure system, it tore through the sides of several houses, wiping out the walls, and carrying several people to their death.  The victims were neighbors of the people that work here.  I saw the destruction yesterday, with only small remnants of the houses eerily remaining.  And I realize I am less than a mile away, up on top of the hillside, comfortably inside of a cement built house.  Can you pray with me for these people who’ve just experienced so much loss–for their encouragement, and hope, and provision?

We spent this afternoon watching our GORP Footballers play in a tournament.  Honestly, Edwin and I don’t know how they play where they do.  The dirt field is littered with trash and people pass directly through the field carrying beds, selling combs, talking to friends, and more as the boys just push on and play with fierce determination. As we waited for them to start, I befriended a group of girls, 4 of whom began braiding and combing my hair for more than an hour, one of whom tried to teach me to crochet (she thought I was fluent in Swahili and thus proceeded to give me all the directions in Swahili, and I didn’t have the heart to tell her I didn’t understand), and still another whom is only 12 years old and by far the smartest young girl I’ve ever met in Kenya.  We exchanged many questions about our home countries; she told me that the nimbus clouds in the sky meant it was going to rain, and then she said something that I thought was profound:

As I think about the challenges and obstacles that people overcome here on a daily basis, it truly is unbelievable.  Even when we pre-ordered bananas from one of the shop keepers to give to the footballers tomorrow, she said not to pay her until tomorrow because you never know if she’ll be alive then.

And, yet I can still see the smiles and laughter on the faces of these kids.  As they sing to me, as our footballers come and gather for devotions, and as the hospitable shopkeeper gives me a piece of her orange, when in fact I know her family may not even be eating, I can see the hope of Jesus pressing in.